Building a coach-like culture in policing.

As featured in the winter edition of H.Q magazine.

“Culture is made from language and behaviours… If we can embed coaching conversations into our culture, we will have a major lever for profound culture shift.”
– J. Keddy, Police & Coaching and Action Learning Lead, Metropolitan Police, London, U.K.

Policing is changing at an unprecedented rate. The leadership imperative requires the ability to reframe obstacles as opportunities and mobilize across different sectors. To effectively manage this change and meet the needs of the communities we serve, police must invest in our people and authentically engage with our community and stakeholders to achieve progress.

According to Chief Nishan Duraiappah of Peel Regional Police (PRP),

This transformational reimaging requires culture shifts, accountability and, most importantly, courage. Chief Duraiappah, the Ontario Association of Chiefs of Police’s First Vice-President 2021-22, argues that “vision for leadership” is to empower every person to lead. At PRP, this has resulted in the leadership development program to support employees’ developmental needs from “hire to retire.” The program provides opportunities for continuous improvement that are not tied to rank or role, promotion or advancement. PRP identified two core pillars for empowering every person to lead: emotional intelligence and building a coach-like culture. Finally, they engaged the coaching, teamwork and leadership firm Heather Clayton Consulting to develop their leadership development program. This is the story so far.

Police leadership today is complex. Geopolitical issues, pandemics and the tension between hierarchy and engagement are just a few of the complex challenges that leaders are expected to navigate. However, no one heroic leader, or even a leadership team, can do this on their own. To expect executives to know everything is both unfair and potentially dangerous. Within a sector steeped in “command and control,” how can policing strategically shift conversations to include and engage leaders across the organization? This is critical to managing the complex issues of today.

Upon his appointment at PRP, Chief Duraiappah knew that part of his mandate would be to address complex issues by developing the next generation of leaders and engaging more powerfully with community stakeholders. His previous coaching experience and his own knowledge and experience in police leadership led him to make development a key priority at PRP. He sought to build capacity and create a more coach-like culture to collectively carry out his mandate.

The International Coaching Federation defines coaching as, “Partnering with [others] in a thought-provoking and creative process that inspires them to maximize their personal and professional potential.” Being more coach-like provides leaders with skills and strategies to cultivate the best in themselves and others – skills like “ask, don’t tell.” This is key for leadership today.

What Is a Coaching Culture?

In his 2012 book, Creating a Coaching Culture, author Peter Hawkins says that the coaching culture is not an end in itself; rather, it’s a means of “creating greater shared value for the organization and its key stakeholders.” Culture is complex. It includes patterns of behaviour, mindsets and has deep emotional and motivational roots. According to Hawkins, shifting these cultural patterns is a five-to- seven-year process. He believes that “evidence of a coaching culture exists when a coaching approach is a key aspect of how leaders, managers and teams develop their people and engage their stakeholders in ways that creates increased individual, team and organization performance, and shared value for all stakeholders.”

In summarizing the “why,” Chief Duraiappah said, “We began to create a coaching culture that allowed members of teams to feel like they had autonomy. This couldn’t happen unless they legitimately felt like they got the keys to the car, [and that] it was truly theirs to drive. They needed to see their supervisors allow them the freedom to apply this new model and really to use all those amazing qualities we hired them for.” He noted that after a year of tremendous leadership work, this change is needed not just at Peel, but across all police organizations. 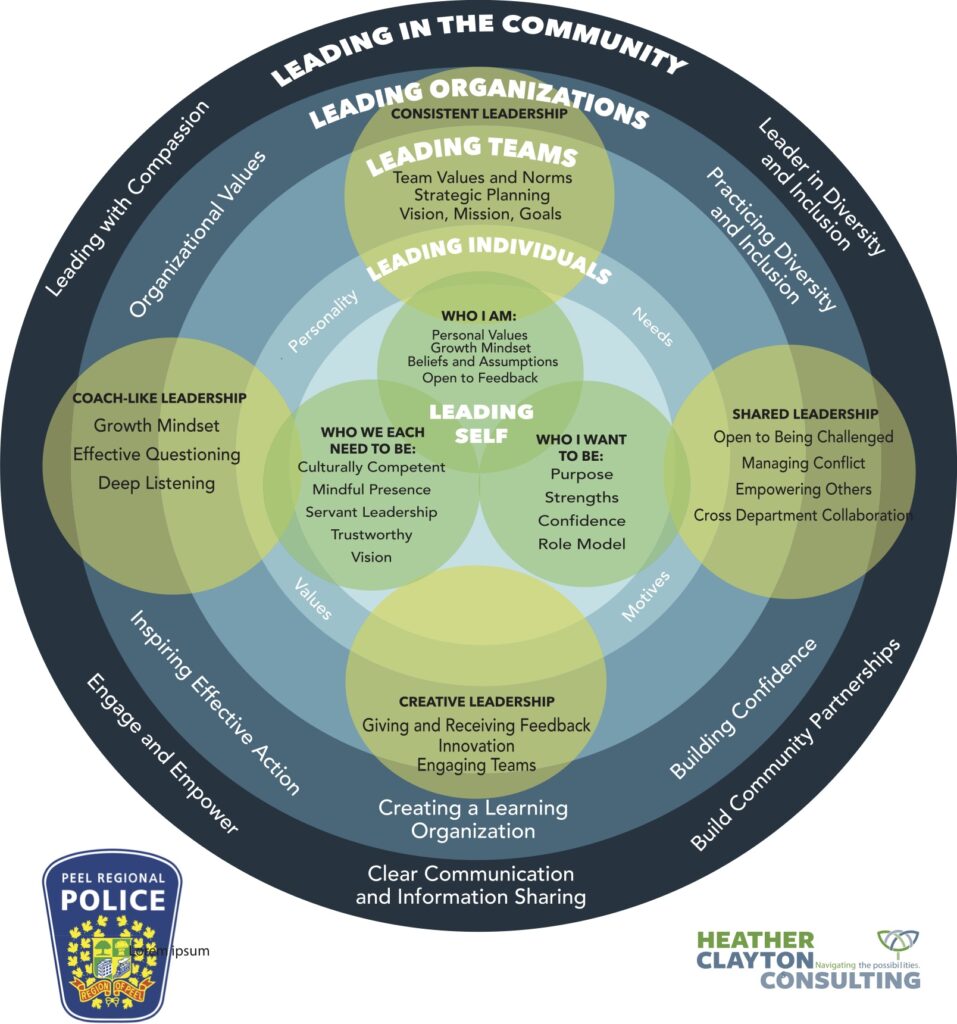 Building awareness not only of intentions, but also of impact, is a cornerstone of leadership competence and was at the centre of the new Peel Regional Police leadership model. Various stakeholders and leaders across the organization provided input. The result was the creation of the “Leading from the Inside-Out” model (Figure 1) and pathway for leadership development and ultimately improved community service. This model echoed the Chief’s refrain: ”If we are not good on the inside, we won’t be good on the outside.”

Become a Learning Organization – from Compliance to Consciousness.

Just attending a course or ticking boxes with an eye to advancement is a detour or deterrent to the true task of learning to lead. Sometimes, even the promotion process can colour the perceptions of leadership growth. From early on, PRP determined that the service wanted to become what is known as a “learning organization,” where continual learning is commonplace and is a pivotal piece for the puzzle of excellence. The leadership program team began to distinguish the “old way” of ticking boxes from the “new way” – authentic engagement and relevant, applicable learning.

Engage Leaders Across the Organization to Build Capacity.

Early on, the chief and his team engaged leaders from across the organization, both to participate in the collective learning and to design an accessible leadership development plan that could take members from “hire to retire.” They sought to build internal capacity, creating coach-like leaders. Engaging leaders across the organization also helped to uncover gems – new leaders who had potential, talent and who aligned with the leadership vision. 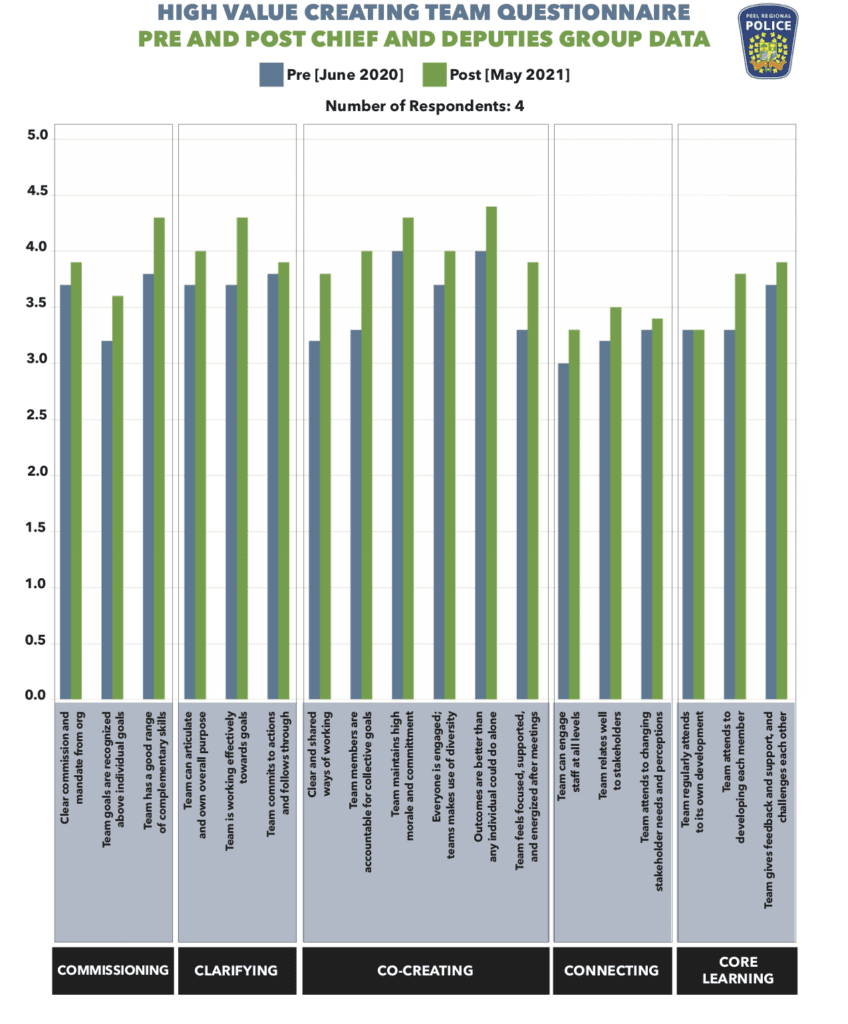 Ensure Top Leaders Are Authentically Engaging in the Work.

This leadership work required buy-in and learning at the highest levels. The chief and deputies at PRP participated in one-on-one and systemic team coaching, sharing their insights, learning together and openly practicing skills and strategies. The number of leaders that noticed and cited this as a compelling reason for their own work was significant. The graph above* highlights growth over year one in key areas related to high value and teams. Due the pandemic, engagement with stakeholders was challenging and is a focus for year two.

As one deputy chief noted, a key lesson was that he needed to engage honestly and authentically in the work. At first, he was skeptical. However, as he worked with his coach and team, he saw key impacts that quickly reinforced his full participation. His advice: “Come in with an open mind, engage and allow for honest leadership dialogue.”

Commit and Plan for Shifts to Occur Over Time, With Ongoing Feedback from Leaders.

Culture change takes five to seven years; this is not a “one and done” experience. While the shifts can be significant in the first year, it takes years to bring about the desired organizational patterns of behaviour and mindsets. Ownership by the organization and the senior leaders, with input from external stakeholders and internal champions, helps sustain momentum and lasting change.

Listen to What the Leaders Are Saying. While external coaches had ideas for how to grow this work, intelligence lies within the organization. Timing on when and how to engage the police association and the police services board were key pieces that were managed well from within.

Recognize and Engage the Potential of All Leaders. Thankfully, PRP had the equity and diversity lead on the development team, which consistently brought different voices to the table and challenged ideas and directions. Under this lead, the service is committed to prioritizing resources to support women and diversity in leadership.

One-on-One Coaching is Not for Everyone. Some leaders prefer other ways to learn and grow than coaching. It needs to be a voluntary commitment. When coaching is not a fit or not coming at the right time, leaders can choose another coach or step away without judgment from other leaders or coaches.

At the end of the first year, the Peel Police Service Board was enthusiastic. One member said, “You, Chief, were hired to change culture and, therefore, morale… you’ve done that with a strong team around you… and more importantly, you are developing bench strength, too.” They endorsed year two, anticipating increased impact across the organization, community and, ultimately, the field of policing.

Equally significant were the participant shifts in perspectives. Examples are:
“We’re more aware of our differences and similarities and using it to our benefit.”

“I believe the change in my leadership style has allowed others the opportunity to lead, develop and be recognized. In the last year, three people in my area were promoted – one to a mid-management position, two to senior officers. I had a coaching relationship with all three.”

“When staff approach me with a problem, I ask them for their thoughts…Often by talking through a problem, the solution is much better than any I would’ve come up with on my own. It’s been freeing for me to know that the expectation of staff is not that I have all the answers, but rather that I will work with them to arrive at a solution.”

Perhaps this participant’s quote sums it up best: “Be open to self-reflection. Give yourself permission to take the time to work on your leadership skills – it will pay off in the end.”

Support References:
*Peter Hawkins, (2020). High Value Add Team Questionnaire. This tool was used to create the pre and post scores for the team.

As featured in the winter edition of H.Q magazine.
Link to PDF version.