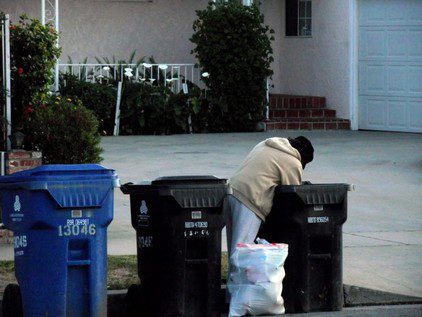 A few days ago, Paul was putting in a bit of time between dropping Becca at her nannying job and starting his ESL volunteering, so he went for a walk in a beautiful neighborhood in Victoria. He was enjoying the houses, all uniquely designed. The sun was shining and it was a lovely day. On the way through the neighborhood he noticed a man going through the recycling bins, collecting bottles. As I am sure is true in other places, this seems like an 'industry' in Victoria - I have even heard people say that it's part of their 'charity' to let street people take the bottles from their recycling...

As Paul passed by the man, he smiled and they both said good morning.
Paul continued to walk, marvelling at and wondering about the extreme costs of the buildings he was seeing. As he made his way back to the car, he again passed by this man. This time Paul stopped, smiled and said what a beautiful day it was. The man smiled back, his face seemed to happy, and he said "It is indeed - it's a very blessed day."

The irony of this is striking...a man picking through recycling, where people will have spent more in two weeks on their drinks than he would likely make in several months. And yet - he seemed happy and considered the day 'blessed'. When Paul told me that story, I was both intrigued and ashamed. What made this man respond in this way? How is it that we who have so much seem to often default to complaining? It speaks again to choice, to attitude, and to gratitude. Those are clearly the big themes these past few months, themes that I will hold on to over the coming weeks, I hope. 7 weeks today we move! I hope we will get to that day and be able to say "It's a blessed day!!"